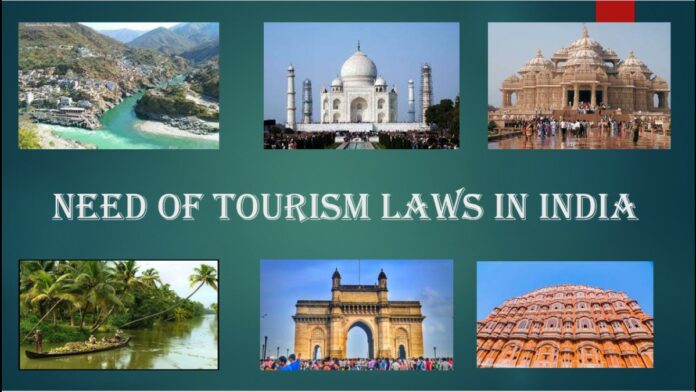 Tourism, as we understand it, is a multifaceted industry with several sectors, locations, travelers, and difficulties. On its website, the World Tourism Organization has launched the Tourism Legislation Information Service. By 1998, its documentation center had gathered over 2000 traces of legislation covering the main sectors of tourist activity in over 140 nations.

There is no one thing as such which can be described as tourism legislation because of the varied nature of tourism itself. However, laws are pervasive in the tourism industry in order to regulate, permit, promote, empower or ban the commercial/leisure activities of both service providers as well as tourists. There are also laws to recognize the rights of the tourists as well as contract laws to determine the relations within the industry segments. Travel and accommodation were two sectors where legislation has been there for a long time, but now new areas that require to be incorporated under tourism legislation have emerged and there has been a demand for  comprehensive tourism legislation.

India is known for its tourism hotspots and attracts visitors from all over the world who come to explore India and its many wonders. The good news is that obtaining a tourist visa is rather simple. The bad news is the never-ending list of legal requirements to meet. The Indian judicial system’s perplexing character doesn’t help matters either.

The presence of what we now refer to as tourist legislation may be traced back to the dawn of time in virtually all civilisations. Many ancient books discuss  accommodations and facilitation, as well as rules governing the operation of sarais, state officials’ duty to travellers, tariffs, and other topics. Today, however, we have more complicated rules, which have arisen not only as a result of the industry’s complexity, but also as a result of varying government views, the existence of many government offices, tourist awareness, and so on. The rules governing tourism come from a variety of places. In the United States, for example, 51 distinct sources (states and the federal government) contribute to tourist legislation. Constitutions, common law, administrative law, treaties, and legislation are all examples.

In India, the Union list, Concurrent list, and State list all feature aspects linked to tourism, despite the fact that tourism is not officially mentioned anywhere. Emigration laws, aviation, ancient sites and monuments, shipping, highways, and so on are all in the union list; wild animal and bird protection, forests, and so on are in the concurrent list; and domestic pilgrimage, theatres, and so on are in the state list. Concerning these issues, many laws have emerged at various times.

There is no such legislation that covers all areas of tourism, despite an increasing desire for one. In reality, “tourist legislation tries to establish in plain, unambiguous terms the rights and obligations of its various segments vis-à-vis the user and vice versa, and to provide for legal protection of the rights and enforcements of the responsibilities so stated,” according to one argument. This implies that almost all areas of tourism should be handled by a single piece of law.

Tourism is a major industry in India, attracting a big number of visitors, but it suffers from the lack of specific legislation. Tourism has benefited society to a significant extent by providing jobs for many people, but it has also harmed the society and the environment. Tourists can be observed causing havoc in tourist areas, polluting the environment and scribbling on monument walls, damaging public property and giving a poor name to their home nation or state. On the other hand, even in the past, travellers were not granted complete freedom; they were regarded with suspicion, and a report of their actions was periodically presented to the monarchs for their crimes and wrongdoings. They were punished in accordance with the laws of their respective countries and kingdoms. While most principles and ethics were considered while assigning punishments to wrongdoers, no tolerance was granted in the case of serious offences.

In the current context, tourist regulations are no different from those that apply in India’s judiciary and legislation. There are a number of laws that impact or are related to tourism, both directly and indirectly. The rules governing tourism are diverse and may be split into two categories:

The Indian government has not enacted any tourism legislation or any central tourism legislation. However, in 2002, the National Tourism Policy was developed for the growth and promotion of the tourism industry, and it includes essential principles for protecting the interests of tourists and tourism companies. But, various laws govern various aspects of tourism. They are as follows:

“The emergence of tourism as an important activity has brought into focus the need for a harmonious relationship between the tourists and the providers of tourist services,” Sitikantha Mishra and G. Ravindran wrote in a paper titled “An Overview of Tourism Legislation in India” presented at a Workshop on Tourism Legislation in India in January 1998. The absence of any conventional rules governing commerce is at the basis of a lot of tourism issues. Once service quality standards are established and amended regularly in response to market demands, everyone would know whether the services provided were adequate or not.

This will result in an overall increase in service quality and a reduction in conflicts between visitors and service providers. The economic importance of tourism, as well as its current stage of development, has brought the need for appropriate central legislation to coordinate and control industry activities on professional lines, as well as to ensure adherence to high ethical standards commensurate with the needs/demands of international activity, into sharper focus. This is especially true because tourism in neighbouring destinations/countries is becoming increasingly competitive.”

In this regard, the emphasis is often on the quality of services, the maintenance of standards, and the minimization of conflicts between service providers and visitors. Many grey areas, such as child labour, sex tourism, and the state of small service providers, must be handled in the larger scope of tourist regulation. In truth, advocating for tourist legislation should not be a knee-jerk reaction to the interests of the wealthy and powerful. Furthermore, laws must be backed up by significant public awareness campaigns; otherwise, the mere creation of legislation and its imposition would be ineffective. There is a need for a code of conduct in many sectors, notably among commercial organisations working in the tourism industry, not only in their relations with each other but also with tourists and the host people.

Because of the many laws that currently exist concerning diverse actions and situations that have an impact on tourist operations and activities, having  common tourism legislation is not a simple undertaking for any nation. However, efforts in this direction must be tempered by the fact that tourism law must have a broad perspective and not be viewed just as a weapon to safeguard the interests of the tourism sector.

Tourism regulation is found in just a few nations across the world. There are different regulations affecting tourist operations and activities in the majority of countries. Tourist protection, border controls, quality of service, environmental protection, conservation of historical sites and monuments, tourism industry regulations, and the relationship between the various segments of the travel and tourism industry are among the various types of tourism-related laws enacted in various countries. These rules are based on a variety of sources. The demand for tourism law was often made from the perspective of the tourism sector or to safeguard the interests of foreign tourists in terms of their safety or to create service standards.

However, there have been calls for laws to promote sustainable tourist growth while simultaneously preserving the interests of the host people and providing economic advantages to the local community. In India,  there are several regulations that impact tourism operations and activities, and as tourism experts, you must be conversant with these laws. The Indian tourism ministry has made many attempts to determine the possibility of enacting tourism laws. These initiatives, however, are still in their infancy, and nothing tangible has emerged in this area.