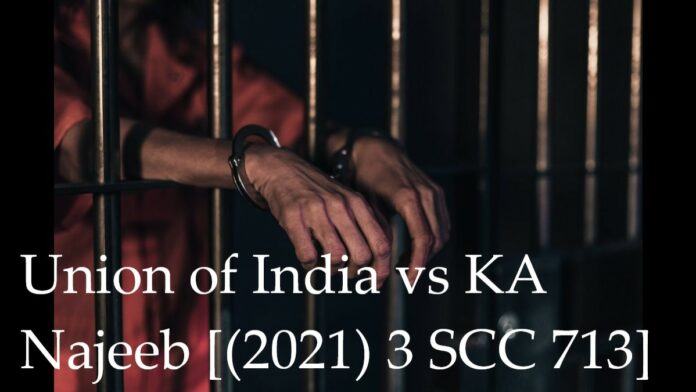 CN Annadurai, the founder of the Dravida Munnetra Kazhagam and former chief minister of Tamil Nadu, called for a distinct Tamil country in 1962, when India was under intense external pressure from China during the Indo-China conflict. Although he did not pursue the notion of a separate country. As a result, the central authority understood that people’s freedoms needed to be limited to maintain peace and harmony within the country. Following that, the National Integration Council established a national integration and regionalization body throughout the country.[1] The 16th Amendment Act was enacted on this committee’s advice, imposing ‘reasonable restrictions’ on three basic fundamental rights: freedom of speech and expression, right to assemble, and right to organise associations and unions. This spawned new legislation, the Unlawful Activities Prevention Act of 1967, which was enacted shortly after the amendment. UAPA was designed to prohibit illegal activity within the country, as the acronym implies. The UAPA was first enacted in 1967 and is now one of the most widely used anti-terror laws in the country. The act’s original implementation provided the central government the right to outlaw any group they regarded to be damaging to the country’s “secular fabric and communal peace.”[2] The legislation was changed significantly in 2004 to broaden its scope, and this ‘exceptional’ statute rapidly began to resemble previous anti-terror measures such as the Prevention of Terrorism Act (POTA) 2002. Terrorist and Activity Prevention Act, 1987 (TADA) and Prevention of Terrorism Act, 2002 (POTA) were both repealed in 1995 and 2004 respectively, prompting the government to make its first amendment in 2004. As a result, there was a pressing need for anti-terrorism legislation. As a result, in the 2004 amendment, a new chapter (Chapter IV) was added to define “terrorist activities.” Following then, only three changes to the Act were made: in 2008, 2013, and 2019, which is the most recent addition to the amendments. The most recent modification was the most contentious and contested of them all. The detention of an individual or an organisation has been modified. Any person charged under UAPA can be detained for 180 days without a charge sheet under the new amendment. Furthermore, an extension can be requested, but an individual’s ‘right to bail’ does not emerge until this term has passed.[3]

The main accused in the case, K.A Najeeb (hereinafter referred to as the respondent), was a member of the Popular Front of India, a radical organisation (PFI). T.J. Joseph, the victim, was a lecturer at Thodupuzha’s Newman College. The respondent in this instance considered a question posed by the victim offensive and believed that the inquiry was purposefully aimed at a certain religion. As a result, the responder and other members of the group prepared an assault on the victim to avenge their religious views. On July 4, 2010, members of PFI assaulted the victim as he was returning home with his mother and siblings. They replied by slicing off the victim’s right palm with choppers, axes, and knives over a small problem involving an unacceptable question. They didn’t just threaten the victim; they also threw bombs made in the country at bystanders, scaring them away from assisting the victim. Following that, an FIR was filed against the assailants, and once the inquiry was completed, the National Investigation Agency (NIA) concluded that it was a conspiracy using hazardous weapons, hence UAPA should be applied to all perpetrators. The NIA special court sentenced all of the co-accused to jail terms ranging from 2 to 8 years. The responder, on the other hand, was proclaimed a fugitive. But he was eventually apprehended and held in judicial custody for five years. During his stay in prison, the respondent sought bail several times but was always denied by the NIA special court since there was prima facie evidence against him. Furthermore, he was ineligible for release under Section 43(d)(5), and the standard bail conditions do not apply under UAPA. The defendant decided to ask for bail in the High Court after being frustrated by his NIA special court attempts. The court overturned the NIA special court’s decision and granted the respondent bail. The court felt the trial had been going on for far too long without concluding. As a result, NIA filed an appeal, claiming that the court’s bail decision was incorrect. As a result, we have this situation.[4]

The Appellant stated that the respondent’s bail in this instance was invalid because it did not comply with Section 43(d)(5) of the UAPA. The attorney emphasised that if the accused is prima facie guilty, the courts are obligated to deny bail. It was also argued in this instance that the fact that the respondent had been a fugitive for years made it clear for the courts to deny bail. Finally, in response to the trial’s postponement, the attorneys, in this case, said that the NIA had submitted an extra affidavit to interrogate 276 witnesses.[5]

The respondent’s counsel emphasized that the majority of the co-accused have either been acquitted or sentenced to no more than eight years in prison. In addition to the aforementioned issue, the respondent had previously been imprisoned for more than 5 years, which is a constitutional violation under Part III of the Constitution’s equal access to justice and right to a prompt trial provision. Furthermore, the respondent’s attorney made the position that if the High Court has granted bail to the accused, the Supreme Court should not intervene unless there are exceptional circumstances.[6]

Opinion of the Court

Even though the accused has been declared prima facie guilty by the NIA, the Supreme Court concluded that the accused is entitled to bail under Section 43(d)(5) of the UAPA. However, courts can issue bail if the provisions of any legislation contradict the accused’s constitutional rights, and in this case, the circumstances made it evident to the Hon’ble Supreme Court that the accused’s ‘right to a quick trial’ had been breached. Furthermore, the fact that the trial is unlikely to be completed very soon. Moreover, Section 43(d)(5) does not impose any restrictions on the accused’s ability to commit another crime, and it is simply another reason to deny bail. As a result, the Supreme Court upheld the decision of the High Court and determined that the special leave petition was unmaintainable.[7]

UAPA was designed to relieve the strain on India’s criminal court system, but it was heavily criticised for being arbitrary when modifications to the Act were passed. It’s worth noting that Section 43(D)(5) of the UAPA is being closely scrutinised, as it grants the NIA special court unique authority to reject bail if it’s judged appropriate. What’s important to note here is that neither the Act nor any decision has defined the term “necessary.” As a result, the investigating authorities may abuse this section. It can also be witnessed in the current case, where the accused was denied bail many times by the NIA special court before receiving it from the High Court. According to data from the National Crime Records Bureau (NCRB), just 2.2 percent of those detained under the UAPA are convicted by the courts.[8] As a result, holding the accused in jail for a prolonged period may appear to be dubious. Longer custody, on the other hand, has an obvious link to fundamental rights. It was apparent in this case as well that the accused had violated his constitutional rights by imprisoning him for more than five years without being tried. It was also noted by the Supreme Court, that the accused was given bail as a result.

State prosecutors have frequently exploited Section 43(d)(5) of the Unlawful Activities (Prevention) Act and its harsh provisions as a weapon, making it nearly hard for anyone indicted under UAPA to get bail. Many under-trial detainees, like the respondent, in this case, are arrested and imprisoned for years while the trial drags on and the investigative agencies take an excessive amount of time questioning witnesses. Even if they are acquitted, the errors in investigation and framing of the guilty under unusual laws like UAPA might cost them their lives. In a similar case, NIA vs Zahoor[9], bail was refused to the respondent  based on the investigative agency’s insubstantial and baseless claims. The same did not even receive a cursory examination. Natural justice, which is enshrined in the constitution, ensures fairness and protects individual liberty. The accused has few or no rights under Section 43D (5) of the UAPA, which is a blatant breach of fundamental principles. Although the court did not establish any specific principles on which future bail applications could be based, the current case should serve as a precedent for similar cases to protect the right to liberty and a fair trial.

This case also highlights the way India’s anti-terror authorities operate, as well as the investigation’s purposeful sluggishness and the trial system, which puts the accused in prison for years. The scope of misuse was extremely huge in the case of State v. Mohd. Afzal[10], since the judiciary claimed that “there was no cause to mistrust the police.” As a result, the frequent practice of custodial offences is largely ignored. To obtain justice in this case, the respondent had to ask for bail six times over four years. Because the right to a quick trial encompasses the stage of the investigation, courts will have to consider this fact in the future and broaden the scope of the decision made in this instance. Investigative agencies frequently employ delaying tactics, as seen in several recent cases. Now that the right to a speedy trial has been determined to be of greater constitutional importance than legislative constraints, the court should recognize such remedies against abuse of power under legislation like UAPA. The grounds for enacting an unusual law like UAPA differ from how it is implemented. They were designed to be viewed as “special laws,” separating the “extraordinary” from the “other.” In her paper, Rajshree Chandra outlines their necessity, consequence, and rationale for ‘exceptionality.’ “Laws may be monstrous in their implications, they may violate civil liberties,” she says, “but they are necessary to deal with exceptional situations.” For extraordinary laws, the threat of menace becomes the raison d’être.” One of the most frequently cited justifications for UAPA is that it was created to fill a legal void, thereby avoiding trial delays. Surprisingly, the aforementioned problems and abuses of power resurfaced in the form of statutes such as the Uniform Administrative Procedure Act and the National Investigation Agency Act (NIA). In a democratic system like ours, the placement of legislation is used to reveal the state’s dark side. Now, it’s (un)safe to report that the belly button is visible and spreading, gulping out the remaining scope.[11]

The Unlawful Activities Prevention Act of 1967 was enacted to assist the government in putting a stop to rising terrorist activity and relieving the criminal justice system of its burden. In light of such incidents, it is reasonable to conclude that, in addition to combating terrorist activities, UAPA has been infringing on individual constitutional rights, which cannot be taken away from citizens when the country is in an “emergency.” Instead of feeling frightened, the government should strive to establish a balance between strict regulations and fundamental rights, so that citizens feel empowered rather than threatened.[12]