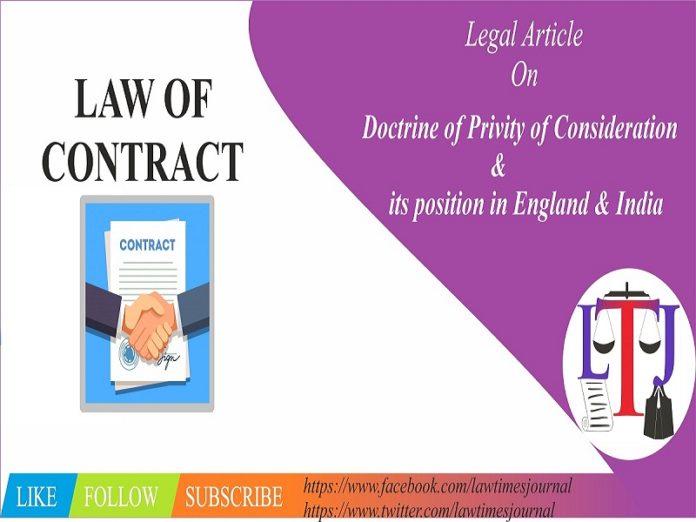 The doctrine of privity of consideration states that the consideration must only move from the promisee and the stranger to the contract, although a beneficiary can enforce the terms of the agreement.

Position of Privity of Consideration in England

Firstly, the doctrine of privity of consideration was not applicable in England. The court in Dutton v. Poole[1] did not consider this principle. In this case, a son made a contract with his father to forbear him to cut down an oak woodland. The son in return, would make a payment to his sister of £1000 once she had married. The father died before the sister was married and the son subsequently refused to pay his sister the money as was previously agreed, at the time of her marriage. The sister and her husband sued her brother for the amount that was originally promised between the father and son.

Later, in 1861, the position in England changed in Tweddle v. Atkinson[2]. The court of Queen’s Bench denied the principle and ruled that a beneficiary who is stranger to the consideration cannot take advantage of it. Here, the plaintiff’s father and ‘G’ entered into an agreement to pay the plaintiff a certain sum of money in consideration to plaintiff’s marriage to the daughter of ‘G.’‘G’ failed to do so and the plaintiff sued his executors for the same. Thus, though the contract entered between his father and ‘G’ was for he is benefiting he remained stranger the contract and the contract denied to give him rights to enforce the terms of the contracts.

Further in Dunlop Pneumatic Tyre v. Selfridge and Co. Ltd.,[3] the fundamental proposition in the English law, i.e. the Consideration must move from the promisee to the promisor only. If any other person furnishes the consideration, the promisee becomes the stranger and, therefore, cannot enforce the promise. This is the postulate of the doctrine of privity of consideration.

Position of Privity of Consideration in India

An old lady gave to the defendant, her daughter, and certainly landed property by way of gift deed. The terms being that a stipulated annuity of ₹ 653 should be paid every year to the plaintiff, sister of the old lady. The defendant executed in plaintiffs favour and iqraranama, agreeing to give effect to this stipulation. The plaintiff filed a suit upon the failure of the defendant to pay the annuity.

The court relied on the judgment of Dutton v Poole,[5] that the gift deed and the contemporaneous agreement between the plaintiff and the defendant may be considered as one transaction and the defendant obtained an estate from her mother that would suffice to constitute consideration under Section 2(d)[6].