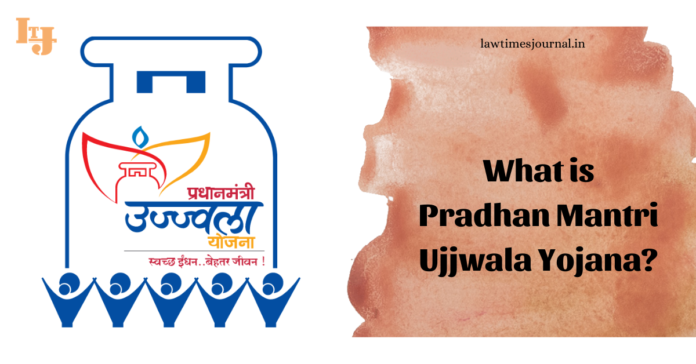 In our country there are still many households which are deprived of clean cooking fuel and have to utilise the old means of fuel like wood, charcoal, dry cow dung cakes etc. Mostly poor women and their children are the victims of the various toxic gases which are released on the burning of fossil fuels, as they have no other alternative than it. The Pradhan Mantri Ujjwala Yojana aims to safeguard the health of women and children but providing them with a clean cooking fuel i.e. LPG. It would provide a means to women, using which they can cook easily and  don’t have to compromise their health in the smoky kitchens and wander in unsafe areas for collecting firewood. The tagline of the Yojana was –

This Yojana provided free of cost LPG connections to women of BPL (below poverty line) households and gave cash assistance to beneficiaries to get a deposit free new connection.

The Yojana was launched on 1 May, 2016 in Ballia district of Uttar Pradesh by Hon’ble Prime Minister Narendra Modi. The objective of the Yojana was to distribute free LPG cylinders to women and make them free from the smoke and choking environment while cooking by using LPG gas for cooking in place of wood or other burning fuels. It aimed at shifting from the traditional cooking methods based on unclean fuels or fossil fuels to clean cooking gas. For improving the respiratory and overall health of women and encouraging women empowerment, this Yojana was introduced. Its objectives also include reducing air pollution caused by burning of fossil fuels. Benefits of this Yojana are granted to women belonging to BPL families on the condition that a prior LPG connection should not be there in the family. Also the age of the women seeking LPG connection under the Yojana should be 18 years or above.

The Yojana is run and directed by the Ministry of Petroleum and Natural Gas. Also its overall budget is estimated about ₹8,000 crores. The connection is supplied with an empty cylinder, gas regulator, pipeline and booklets to help in operating it. Financial benefits of ₹1600 is also granted to every connection. While launching this yojana, the government had a target of distributing 5 crore LPG connections in its tenure, but completed the specified target before the completion of the deadline. The government has established a procedure to apply for ujjwala yojana connection.

The yojana will increase usage of LPG, and reduce health disorders caused due to using conventional cooking fuels. Burning of wood, coal and other fossil fuels lead to pulmonary diseases, cataract and heart disorders. According to different researches, health experts are of the opinion that the smoke released in the burning process contains hazardous gases like carbon dioxide, particulate matters etc. The unclean cooking fuels are the main source of indoor air pollution and cause non-communicable diseases like heart disorders, stroke, chronic obstructive pulmonary diseases, cancer etc. By the proper implementation of this yojana there will be decreased air pollution caused by smoke from solid fuel usage in kitchens and other places. Also the benefits transferred through Jan dhan yojana will further fulfill the objective of increasing financial inclusion of poor people in it.

This yojana will also ensure energy security to poor households which will further reduce the burden on government hospitals caused by large cases of health issues due to using conventional cooking fuels. The Union Government has also launched a countrywide LPG Panchayats as backup to the ujjwala yojana, to distribute LPG connections among the rural areas where conventional is used for domestic purposes. This LPG Panchayats were first launched in Gandhi Nagar, Gujarat and within one year 1 lakh such panchayats were activated in the country. The Idea behind the platform was to trigger discussions by sharing personal experiences on the benefits of using clean fuel compared to traditional fuels.

There are many limitations analysed while promoting this yojana. As the whole process of applying for a ujjwala yojana connection is so time consuming, thus the process of selection of beneficiaries is a huge laborious work to do and it often leads to delay in proper verification and distribution of connection to the beneficiaries. Also with increased usage if LPG it is estimated that the demand of LPG would see at least a double digit growth in the coming years, placing stress on the LPG sources.

To draw up a complete plan of action, states with less LPG coverage were identified and they were given priority in implementing this yojana. With enhancement in the progress of ujjwala yojana an increase of 12% in the LPG coverage was seen nationwide in a year. Many social workers, retired and serving servicemen, agents, self help groups etc focused on imparting more knowledge about this yojana to people by organising various species camps and drives. The petroleum ministry also placed many efforts, took on ground feedback, timely follow ups and ensured gas safety by sharing valuable knowledge with people. For monitoring the growth and progress of yojana, verification process etc use of information technology was done. Safety clinics were also established in many villages to introduce people with usage and safety measures kept in mind while cooking on LPG. Many media campaigns, advertisements etc were also made and circulated , even in regional languages to support and encourage ujjwala yojana. Still to Sharpen and sharpen the process of development in country, government is making many initiatives and running various such programmes and policies. This yojana has provided the poor village women with means for getting their status uplifted and supported women empowerment at household as well as the societal level.